【Volume 47】A Markush claim is a particular kind of patent claim that lists alternative species or elements in a patent claim, which is commonly used in chemical and pharmaceutical patents. However, each patent office has different interpretation on the definition of the Markush claims, as well as the legality of deleting several alternative elements in the Markush group in a post-grant amendment.

In Beijing Winsunny Harmony Science & Technology Co., Ltd. v. Daiichi Sankyo Co., Ltd., the Patent Reexamination Board (“PRB”), the Beijing First Intermediate People’s Court (“BFIPC”), the Beijing High People’s Court (“BHPC”) and the Supreme People’s Court (“SPC”) each held different opinions on the construction of Markush claims and the allowability of the post-grant amendment. The SPC finally overturned the second-instance judgement. The article aims to introduce the current practical interpretation of Markush claims in China built by the SPC judgement 1.

The Taiwan Intellectual Property Office, in practice, interprets Markush claims as a “parallel technical solution”, and according to a recent ruling made by the Taiwan Intellectual Property Court 2, the deletion of alternative elements in the Markush group in a post-grant amendment is allowed. On the contrary, the European Patent Office (EPO) adopts the “whole technical solution theory”. If certain alternatives or groups are not disclosed in the specification, the deletion in opposition proceedings would not be allowed by the EPO.

Therefore, there is a trap for the unwary claim drafter using Markush group language. The applicant might claim a wide scope of patent right when filing the patent application with Markush claims. In some countries like China, however, the patent right might be challenged in post-grant proceedings.

Daiichi Sankyo Co., Ltd. (“Daiichi Sankyo”) is the patentee of the invention patent no. CN1121859C, “Process for preparing pharmaceutical composition for treatment or prevention hypertension” (“’859 patent”). Beijing Winsunny Harmony Science & Technology Co., Ltd. (“Beijing Winsunny”) raised an invalidation request against the ‘859 patent. Daiichi Sankyo requested to amend Claim 1 of the ‘859 patent in the invalidation proceeding, and whether the amendment has introduced new matter is the main issue in this case.

Post-Grant Amendment to Claim 1 of the ‘859 Patent

The ‘859 patent relates to a process for preparing pharmaceutical composition for treatment or prevention hypertension, wherein the antihypertensive agent is limited as at least a type of compound shown as the following formula (I) or pharmaceutically acceptable salts and esters thereof. 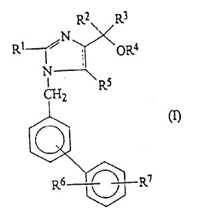 Claim 1 of the ‘859 patent recites Markush groups limiting the substituents selectable in R1 to R7 in formula (I). The filed post-grant amendments include:

The PRB and the BFIPC held that the amendments (2) and (3) have introduced new matter, while the BHPC allowed the amendments. Finally, the SPC again revoked the judgement of BHPC. The main points of argument include:

The BHPC in the second instance held that a Markush claim recites a set of “parallel” alternative elements. Each compound is deemed as an individual technical solution, and the claim is defined as a collection of multiple technical solutions. Therefore, the deletion of elements narrows the scope of the claimed protection without injuring public interest. The post-grant amendments should be allowed.

At the highest level of court, the SPC overturned the second-instance judgement and rejected the post-grant amendments.

(1) A Markush Claim is Deemed as a Whole Technical Solution:

Furthermore, a Markush claim possesses a wide scope of protection by covering all compounds with the same structure, property or effect in a claim. Once the patent is granted, it would thereby maximize the patentee’s right and interest. The construction of a Markush claim should be strict for the sake of fairness.

(2) The Amendment to a Markush Claim in an Invalidation Proceeding Shall Not Generate a Class of or a Single Compound with a New Property or Effect:

There are more points to be considered in the examination of an invention patent in the chemical field, such as whether the invention may be implemented, which needs to be confirmed by actual experiment results. Therefore, invention patents in the chemical field usually involve more complex issues. Moreover, if the deletion of any option for any variable is allowed, even if the deletion narrows the protected scope of the patent right without injuring public interest, there would be an uncertainty regarding whether the deletion would result in a new scope of right, which neither gives the public a stable expectation, nor helps the stability of the patent right system. Hence the post-grant amendment should not be allowed.

Compared to the inconsistent views on the construction of Markush claims in China in the past, the SPC has built a clear, strong, and rather strict principle in this case. When a Markush claim is interpreted with the whole technical solution theory, though a patentee may obtain a wide scope of right in the filing stage, the patent is easily challenged when the patentee attempts to claim the right. Moreover, differentiation between the patent and prior art might not be able to be made by deleting several elements in the Markush claims in a post-grant amendment. Hence applicants should be careful when drafting patent claims. Dependent claims may also be considered to make concrete limitation of several elements, which may help obtain a larger scope of patent right and, at the same time, serve as the basis of the post-grant amendment in the future.

On the other hand, it is observed from this case that in China, the determination on patent rights, including obtaining and claiming the rights before and after the patent is granted, is somehow quite strict. In this case, the SPC tended to maintain the stability of public interest, holding that the patentee should not be benefited by the Markush claim in both the filing stage and post-grant proceeding. Though the SPC mentioned that the interpretation on Markush claims might still differ from case to case, this example in some aspects shows the trends of patent examination and judgement in China. Applicants may pay more attention to such trends in order to ensure a successful patent portfolio in China.